Let us introduce a monster ball from Adidas that amazes its buyers through its outstanding construction, design, and performance. It is a FIFA-approved football that was developed as a premium match soccer ball in 2020. If you ever desired to have an official match ball and wanted to play with a pro ball, then this is for you.

Let me amaze you by mentioning how Adidas developed this ball. How many years did it take engineers to develop? How many players tested it? What factors did the manufacturer consider to make it to be perfect? The name of the ball is Adidas Uniforia Pro.

Let’s dive into its history to answer all of these questions.

Adidas Uniforia Pro – Tested and Analyzed: Should You buy It? 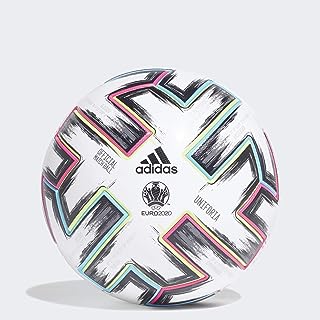 Check On Amazon Check on Ebay

The History of Adidas Uniforia Pro

Adidas released Unfioria Pro in 2020 as an official match ball for the UEFA Euro Football event. This ball is now available in many different versions that we use for many different purposes.

The Pro Uniforia ball took makers around four years to develop the ball, and it was taken through 3 different continents. Approximately 600 soccer players from 12 different countries tested it.

This ball has gone through all the processes of FIFA tests and got approval once it satisfied its developers and FIFA’s testing manual.

In order to get the FIFA’s label and become a professional or official match soccer ball, it met all FIFA’s standard testing requirements such as; size, weight, shape, water absorption, and other performance characteristics.

This ball is almost the same as Adidas Telstar 18 that was used in the world cup 2018. Both of these balls’ performances are the same. Each of these balls has stable flight, better aerodynamics, and easy-tracked graphics.

What makes this ball a bit better than Adidas Telstar (2018), are some of its latest features such as; a textured surface, which provides better grip, thermally bonded panels that prevent more water uptake, has low rebound that makes this ball easy to control, high-quality PU that ensures durability, great trajectory, and perfect weight.

What we and all international goalkeepers liked about Uniforia is its design. Telstar was a bit hard to track against some backgrounds through the air. In contrast, Uniforia pro is well-designed and can be tracked easily against any type of background.

Furthermore, it is made of 100% polyurethane leather and has thermally-fused panels that help it avoid more water absorption. While checking the ball, I noticed that its flashy and slippery surface helps it travel a bit longer than Telstar 18. It still provides a better grip but not as better as Telstar.

While the ball is made of high-end materials, so it’s somehow more expensive than some other official match balls. Some soccer players may afford it many times, that’s why they should not use it for training and practice purposes. Many Adidas balls are used for multipurpose use, but since this one is costly, that’s why avoid using it in practice and training sessions.

Let’s discuss Adidas Uniforia’s other versions and their uses so that you can know which one suits you best and which one to use for your game.

Uniforia Pro OMB is used for professional and official matches. This ball was designed for UEFA Euro 2022 soccer tournament. Due to its high price. You can only use it for official and premium matches. As we have discussed all of its qualities and usage above so, we hope you may have noticed or known everything about this ball.

This version has almost the same specifications as the pro one, but it is a bit cheaper. I am not quite sure whether it performs best for every club that trains with this version or not. In my view, Matchball Replica Club must be the recommendation of every soccer player for the internal club’s game.

Furthermore, this ball is intended for use in practice and training sessions, so you should not hesitate when buying it for training purposes. It does well on natural grass or futsal-type surfaces when being trained with it.

Neither my team nor I have seen any difference in this ball, comparing it with its other versions during training sessions. All of these come with the same textured surfaces, which makes these balls easy to control, feel soft, and travel well.

This ball is known to be the best quality training ball. Everyone used to call this ball the Top Replique. This ball has also gotten FIFA’s approval and label. As discussed above, nothing changes in this version as well when compared to Matchball Replica Training. The only difference between all these versions is the price.

Nothing can now confuse you when buying an Adidas Uniforia Pro soccer ball or any of its other versions. All of these balls are intended for different types of uses since every of its version is specified with their names, so you can choose the best one according to your purpose of play.

The best recommendation for you is to buy the Pro Version or the League Version. If you cannot afford these two versions, you can buy any of its other versions without any fear of low performance.

I Benjamin have been a lifelong fan of the game of soccer and bring a wealth of knowledge and experience here on the site. Being a professional soccer player, I have a unique perspective on the sport and am able to provide valuable insights to our readers. In my role as the lead writer for our site, I aim to help readers improve their understanding and enjoyment of soccer through my in-depth analysis and informative articles. Spread the loveSoccer balls come in various sizes, various designs, and various purposes of use which make it tough to give a definitive answer on what are the best soccer balls for juggling. To help you narrow your search, we have compiled a list of variables to consider when buying a new ball. If you’re… Spread the loveAre you seeking to eliminate your stress and anxiety through a unique and enjoyable activity? If so, we highly recommend perusing our curated list of the best bubble soccer balls. These options will not only enhance your fun, but also provide a rejuvenating respite for your mind and body. Experience a new level… Spread the loveIt’s no wonder that a soccer ball comes in 5 different sizes, and we use every size for a different age group. Undoubtedly the parents will choose a size that fits their child. In order to choose the best soccer balls for toddlers, we are going to explain everything that confuses you, like… Spread the loveAre you looking to elevate your training to new heights with exceptional equipment? Tired of ordinary training balls that fail to meet your expectations? Focus on honing your soccer skills without worrying about the quality of the ball. Keep reading to discover why you’ve come to the right place. We have assembled some… Spread the loveIt is difficult for you to decide which Adidas football would be best for you since you are an Adidas fan, but you do not know which product will suit your type of play. And I am not gonna blame you because it is a difficult task even for international players. Adidas has… Spread the loveIt is hard not to consider soccer as one of the most amazing sports worldwide. Due to its popularity, its lover plays it everywhere even if concrete walls and passing lock them up. All a footballer needs is a tiny space, a pair of shoes, and a soccer ball. That’s it, and you…